The Wolf is the national animal of the Chechen nation. The symbolic and metaphorical associations of the wolf stretch deep into Chechen history with many positive idiomatic uses of wolf.

Turpalo-Noxchuo the mythical founder of the Chechen people was raised by a wolf-mother or she-wolf, which bares striking parallels to Apollo, and also Romulus and Remus.

In “Chechens a Handbook” Amjad Jaimoukha adds an even more intriguing detail:

According to mythology, god had created sheep for the wolf to enjoy, but man tricked it out of its ‘patrimony’, so it had to resort to ruse and robbery to reclaim its right. The cult of the wolf was widespread in olden times, and the observance of its day, Saturday, afforded immunity from lupine raids on one’s ovine stock.

Vainakh peoples held the belief that the tail and tendons of wolves held magical properties. Wolf teeth and bones crafted into amulets, were hung around the necks of children as a protection from disease, malevolent spirits and evil eyes.

Theiss of Kaltenburg was an 80 year old man of Livonia, tried for heresy in the late 17th century.

He claimed to be part of benign cult of Werewolves who fought the devil and brought back stolen grain and property.

The judges in the case did not agree with his defence, and he was sentenced to flogging and banishment.

Historian Carlo Ginzberg, in his 1966 paper “The Night Battles: Witchcraft and Agrarian Cults in the Sixteenth and Seventeenth Centuries” suggested this was linked to the agrarian Benandanti cult of Northern Italy. He further theorised that it was evidence of an ancient shamanic shape shifting cult.

Unfortunately an interesting story does not always make for the best theory and Ginzbergs intriguing hypothesis has been strongly criticised; most notably by Dutch historian Willem De Blécourt in his 2007 paper “A Journey to Hell: Reconsidering the Livonian “Werewolf””.

However, recently Bruce Lincoln gave a measured reappraisal of the notion. In his 2015 Hayes-Robinson lecture ‘The Werewolf, the Shaman, and the Historian: Rethinking the Case of “Old Thiess” after Carlo Ginzburg’

Full audio of Lincoln’s lecture can be found here:-

This intriguing book by Hans Peter Duerr was a slightly controversial bestseller in its time, but includes a fascinating perspective on Medieval Werewolves.

Duerr posits the theory that those accused of witchcraft, possession and werewolf behaviour in early modern Christianity were actually having hallucinogenic visionary journeys with the aid of a herbal salve.

Although mostly dismissed by anthropologists, its contemporary sales likely had a larger impact on the emerging pagan culture, in a similar same way to Margaret Murray’s 1921 Witch Cult in Western Europe.

The author also readily admits to esoteric practices, in an opening statement that warns the reader not to try and make their own salves.

In the past few years, I have frequently received letters from readers expressing interest in the composition and dose of witches’ salves. I have also found in the American ‘freak’ literature totally irresponsible ‘recipes’ that were praised as ‘tickets’ California-style. I discussed the matter with some nightshade spirits who are friends of mine, and they asked me to transmit the following to the readers of this book:

1 They do not want to be called just for fun or out of craziness. If they feel like striking up a friendship, they will let the respective person know.

2 The tickets they issue are often one-way, singles i.e.: the return part is missing.

This sort of admission is either a positive or negative recommendation depending upon one’s view of the mystical.

Most surprising of all is the notes and bibliography which comprise nearly half the book!

Published in Germany in 1978, Felicitas Goodmans English translation was published in 1985.

“The sign of the wolf (or the wolf-pack) is clear enough in Greek age set confraternities such as the Athenian ejhbeia and the Spartan krupreia the adolescents in these peer- groups prepared for full warriorhood by behaviour that was exactly reversed from the norm: they prowled at night, were hidden and covert in their actions, used trick, trap, stratagem and ambush and all the techniques forbidden to the true adult warrior-hoplite, in his daylight discipline.

“However, these young warriors-in-training eventually would be reintegrated into their societies, while a “wolfish” activity or character, from Hittite times on (but especially well illustrated in the Germanic sources) defined an outlaw, one whose crimes had put him outside society, and who can be hunted like the wolf, i.e., be both “killer” and “to be killed”; cf. Germanic warg. Werewolf or man-wolf activity may not be simply solitary, as shown by a widely-recurring belief in destructive, night-roaming bands or confraternities of lycanthropes who had abjured the laws of society.

“These “secret bands” have also been connected to the German Wilde Jagd or Wutende Heer, legendary affiliates of Death and the Devil, and instances of bloodthirsty and destructive werewolf bands are also known in the Iranian sources and in Baltic and Slavic folklore.”

Image is by Svartvarg on deviantart (deactivated)

?*𝗱𝗵𝗼́𝗵𝗮a𝘂𝘀 (gen. *dhh̥aṷós) ‘± wolf’. Phrygian – δἀος ‘wolf’, Greek – θώς‘jackal; wild dog; panther’. Latin and Greek show a derivative with a new full-grade, * dhéhau-nos: Latin – faunus ‘deity of forests and herdsmen’ (whose feast was part of the Lupercalia), Greek (Hesychius) θἀῡνον ‘± wild animal, beast; the constellation Lupus’ (compare the neo-Latin derivative in New Modern English – fauna). In both Latin and Greek there is at least the possibility that *dhéhaunos had some reference to wolves. Perhaps a late dialect word in PIE-originally an epithet for wolves or other large carnivores. Often, though not compellingly, related to Old Church Slavonic – daviti ‘strangle’. The latter may better be related to New Modern English – die, etc.

Image is a detail from a poster for Valhalla Rising – original poster is by Scott Wool and can be found here:-

Image is “Away” by Sergey Demidov his work here
https://www.deviantart.com/sergeydemidov

There is strong circumstantial evidence to suggest that a female analogue to the männerbund existed amongst the Proto-Indo European peoples and continued in their daughter cultures, such as the Ancient Greeks.

The Frauenbund, if it did exist, is unlikely to have been a female warrior group, in the sense of the ritualised adolescence of the early männerbund structure. (Although the Scythians did reputedly have female warriors).

The connection to women and Wolves in the earliest Greek myths suggests a very different identity for this hypothetical Frauenbund.

The recurring aspect of female mythic identity in early Greek myths is that of spells/magic/incantation or some kind mysticism.

It is therefore likely in the Proto indo european era that while adolescent boys were living outside the village and learning war and ritual, adolescent girls were learning the equivalent rituals of medicine/herb-lore.

An education in end-of-life care would also likely have been a core component of this education, given the recurrent Goddesses/death/wolves connection.

The (admittedly circumstantial) evidence for the Frauenbund will be posted on the usual 𝗢𝗳 𝗪𝗼𝗹𝗳 𝗮𝗻𝗱 𝗠𝗮𝗻 𝗕𝗼𝗼𝗸 social media over the coming days/weeks.

Mεγασθένης, c. 350 – c. 290 BC) was an ancient Greek historian, diplomat and Indian ethnographer and explorer in the Hellenistic period. He described India in his book Indika, which is now lost, but has been partially reconstructed from the writings of the later authors.

Megasthenes describes mountain dwelling, dog-headed people, in India, who spoke in barks, wore the skins of wild animals and lived by hunting. 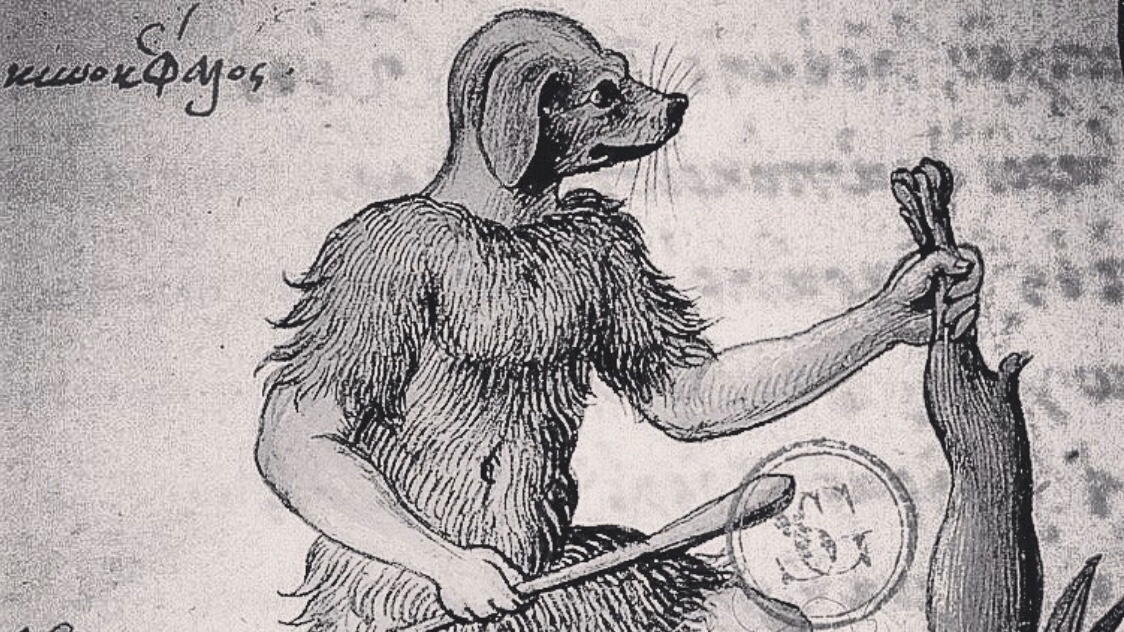 “They do not live in houses, but in caves. They set out for the chase with bows and spears, and as they are very swift of foot, they pursue and soon overtake their quarry. The women have a bath once a month, the men do not have a bath at all, but only wash their hands. They anoint themselves three times a month with oil made from milk and wipe themselves with skins.

“The clothes of men and women alike are not skins with the hair on, but skins tanned and very fine. The richest wear linen clothes, but they are few in number. They have no beds, but sleep on leaves or grass. He who possesses the greatest number of sheep is considered the richest, and so in regard to their other possessions. All, both men and women, have tails above their hips, like dogs, but longer and more hairy. They are just, and live longer than any other men, 170, sometimes 200 years.” 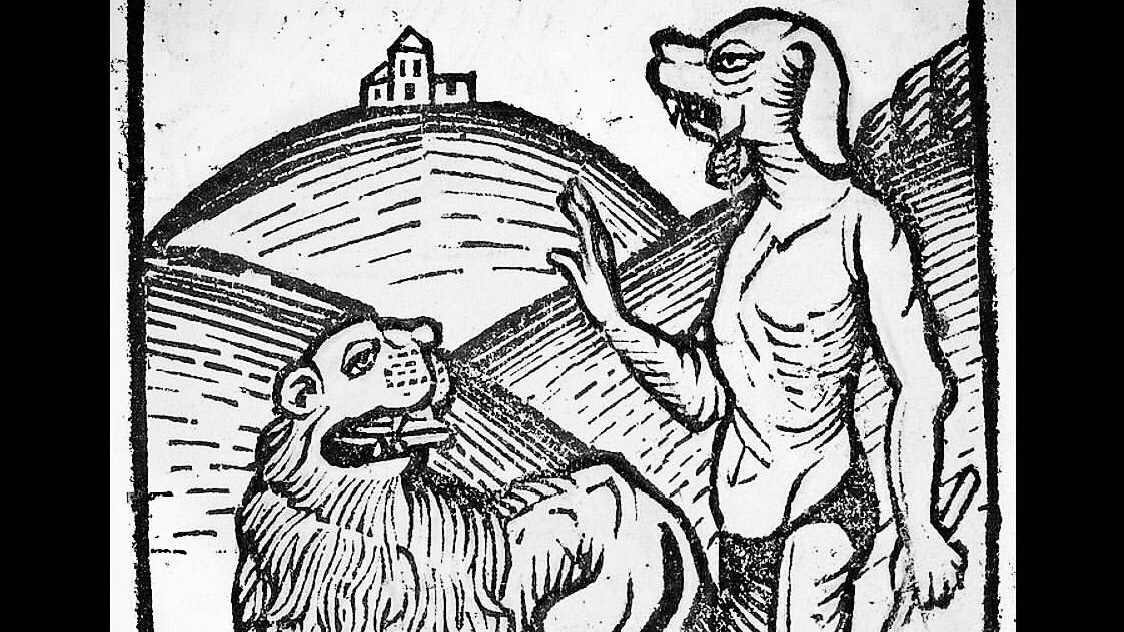 500 BC – Dog headed men in India described by Ctesias, a Greek Physician, in his text Indica. Ctesias, Indica Fragment (summary from Photius, Myriobiblon 72)

“On these [the Indian] mountains there live men with the head of a dog, whose clothing is the skin of wild beasts. They speak no language, but bark like dogs, and in this manner make themselves understood by each other. Their teeth are larger than those of dogs, their nails like those of these animals, but longer and rounder. They inhabit the mountains as far as the river Indos. Their complexion is swarthy. They are extremely just, like the rest of the Indians with whom they associate. They understand the Indian language but are unable to converse, only barking or making signs with their hands and fingers by way of reply, like the deaf and dumb. They are called by the Indians Kalystrii, in Greek Kynocephaloi (Cynocephali) (Dog-Headed). They live on raw meat and number about 120,000 . . .

The Wolf cult from Proto Indo European antiquity to Heathen Warriors and the origin of werewolves.